Utopia: Ô??Plan, project, doctrine or an optimistic system that seems impossible in the moment of its formulation.Ô?Ø

Yes. This week in Madrid, I went to see Utopia, the latest theater performance by Leo Bassi. Indispensable for those who have or had a progressive understanding of the world.

I am devoted to Leo Bassi. As soon as I knew of him from his appearances in the Spanish television, where he saw himself constrained to compact his show by sacrificing his political discourses and reducing it to a set of provocations and symbols. ThatÔ??s TV for you!

Not many people were able to understand what that buffoon was about in his reactions to the public when he exploited gunpowder excrements and faked eating them.

Nobody ever dared to say to television stations what they thought of them. Bassi did. But not many people understood him: The large majority of material in television is crap, and in its effect, we take it in without complain in the glory of their executives.

A few years back life put me upfront of the doors of his theater. It was a Tuesday. I had nothing to do and the play began minutes after. I went to the window, I bought a ticket and sat. I donÔ??t know why I did it. I had never in my life done something of the like. Well, when the play began, I trespassed the mirror, I had a revelation, a title that gave the name to his next play. At the end of the show I went up to him and told him.

Since then, we have been great friends, which has led me to assist to many close-ups of his provocations and even to many of the difficulties and threats he suffered with Ô??The Revelation.Ô?Ø This play was not of Catholicism, even if it was said to be. It was about rationality, illustration, against mysticism and superstition, against the fear of humans, -sometimes so simple, so tiny, so aloneÔ?ª- 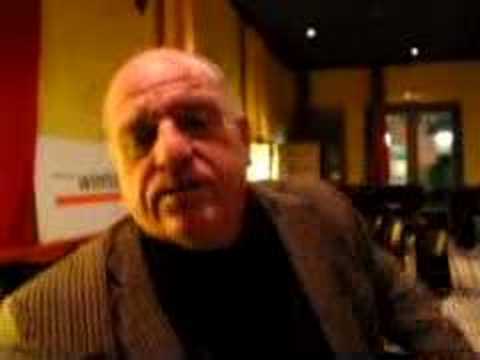 I can say that I had the privilege, also, to have shelter once in his house at the island, in which terrain, Bassi sculpts oneiric forms; and next to Laura, his partner, caresses the peace by dedicating time to thought and to walk among the voices of palm and fruit trees. Therefore, I can say, that I have met the genius. The most unknown phase of Leo Bassi is the spring of his philosophic profound reflection of enormous intellectual capacity. Bassi has returned to Madrid with Ô??Utopia,Ô?Ø a work of the loss of bigger dreams, of the renunciation of the left-party to change the world. And about the anesthesia that many idealist suffered and the grandiose projects. But is a little more than a representation, it is the agitation of the consciousness, the philosopherÔ??s alert. A gift to whom search for responses and never find the path.

Whose fault is it anyways that utopiaÔ??s are under anesthesia? Is it not an Utopia the wick to all great change? So, the ones in fault are the perfectionist, the pessimist, the pragmatics, the conservatives, the frightened. Because utopia is a word for the courageous, for those who change the world. Of Leo Bassi.